StilL 630 is hidden in plain sight in Downtown St. Louis.

NSA: No active shooter at Fort Meade; base was undergoing a training exercise

(Meredith/CNN) -- Despite initial reports, officials said there was not an active shooter situation at Fort Meade in Maryland on Thursday morning.

At issue is the book "It's Perfectly Normal" by Robie Harris, which teaches children about puberty and sex education.

Richard Buckley has died. The fashion journalist and husband to designer Tom Ford died on Sunday, ET confirms. He was 72.

"It is with great sadness that Tom Ford announces the death of his beloved husband of 35 years, Richard Buckley," Ford's rep said in a statement to ET. "Richard passed away peacefully at their home in Los Angeles... with Tom and their son Jack by his side."

The statement added that Buckley, who previously battled throat cancer, "died of natural causes after a prolonged illness."

In a 2011 interview with Out, Ford and Buckley recalled meeting each other at a New York fashion show in 1986. At the time, Buckley was the 38-year-old fashion editor at Women's Wear Daily.

"He was confident and handsome in a way that made him almost unapproachable," said Ford, who was 25 at the time. "His stare was so intense that it completely unnerved me, and when the show was over I literally bolted out the door and down the street to avoid him."

The pair crossed paths again shortly thereafter, and Buckley admitted that he was "babbling on like a schoolgirl" as they rode the elevator together.

"I was shamelessly flirting with this boy," Buckley said. "He, meanwhile, said nothing, and the quieter he was, the sillier I became."

"I decided in that elevator ride that I was going to marry him," Ford said. "He seemed so together. He was so handsome, he was so connected, he was so grown-up, so he was very intimidating. And he really chased me -- not that he had to chase that hard. It excited me but it also scared me, because I knew he was different and that whatever it was I felt with him was very different from what I'd felt before."

From there, the pair was quick to say I love you and move in together. They tied the knot in 2014, and share an 8-year-old son, Alexander Buckley Ford.

"Richard and I are bound together, and I think that's what that recognition is when you look someone in the eyes and you feel like you've known them forever," Ford said. "It is a kind of coming home."

"I couldn't imagine being without Tom now. I couldn't imagine what I'd be like if something happened to him," Buckley said. "There's only one Tom for me. He is still that man who I met 24 years ago, who has a good heart." 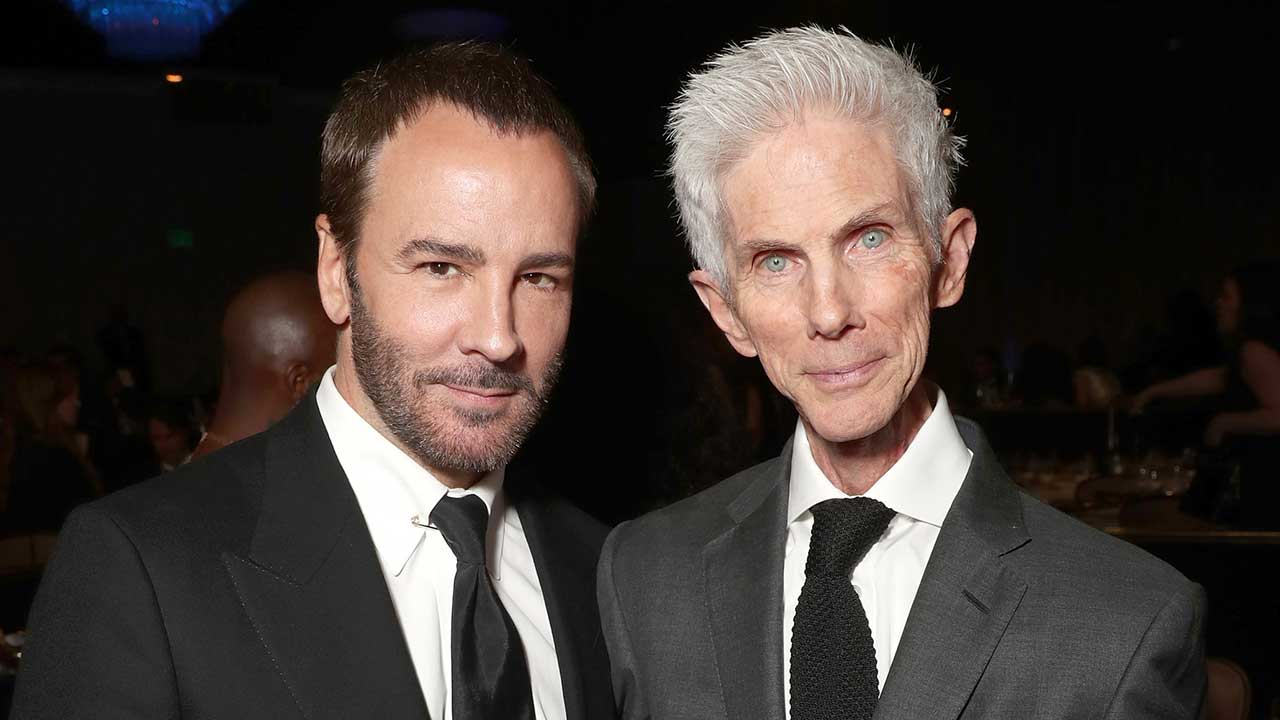 Fashion editor Richard Buckley, the husband of designer Tom Ford, has died at the age of 72, according to a statement issued by representatives of Ford's eponymous fashion brand.

A first edition copy of the classic novel "Frankenstein" sold for $1.17 million at a recent auction in New York.

Irina Shayk and Bradley Cooper's daughter isn't a fan of the paparazzi. Shayk covers the debut issue of Highsnobiety's HIGHStyle, and tells the magazine how she and her 46-year-old actor ex explain the photographers to their 4-year-old daughter, Lea.

"Sometimes my daughter is scared -- she sees the paparazzi from miles away," the 35-year-old Russian model says. "...We had to explain to her, like, 'They’re just doing their job. By selling pictures, they make their living. You don’t have to be scared.'"

Discussing the paparazzi with Lea is just one way Shayk and Cooper effectively co-parent following their 2019 split. The exes are also united on the values they want to instill in their daughter.

"Me and her father are very strict," Shayk says. "When she finishes eating, she gets up from the table, takes her plate, says 'thank you.' Without 'please' or 'thank you' she’s not getting anything."

"It’s hard, because she has so many toys. I had one doll, and I still have this doll. Blonde, blue eyes, big Russian doll," she continues, alluding to her childhood in Russia. "My grandma used to make clothes for her. And I always explain, 'Look, this is my doll. I had only one.' Or sometimes, 'You have this candy. I used to have candy only for Christmas.'"

As for Cooper, Shayk was quick to praise him as "a full-on, hands-on dad," adding that he does not use a nanny. "Lea went on holiday with him for almost two weeks -- I didn’t call them once," she says.

While the pair thrives as co-parents, their romantic relationship did not work out. As of late, Shayk has been linked to Kanye West, amid his divorce from Kim Kardashian West. On that topic, Shayk remains mum.

"My grandma was a secret agent in WWII. I think private life should be private. Irina is KGB-style," she says. "Tomorrow there is going to be a rumor that I’m dating my doorman, OK? Then after tomorrow, it’s going to be someone else. Look, there’s always something there, and I’m just keeping it to myself."

Though reports swirled last month that Shayk and West had split, a source told ET in July that the pair was never officially a couple.

"The two of them have always just been having fun together," the source said. "They're both doing their own thing and down to have a good time without any strings attached."

Earlier this week at the Met Gala, Shayk stayed quiet about the status of her relationship with West, but told ET's Rachel Smith, "Honey, life treats me always well. I can't complain."

Kanye West and Irina Shayk Had No Strings Attached Relationship 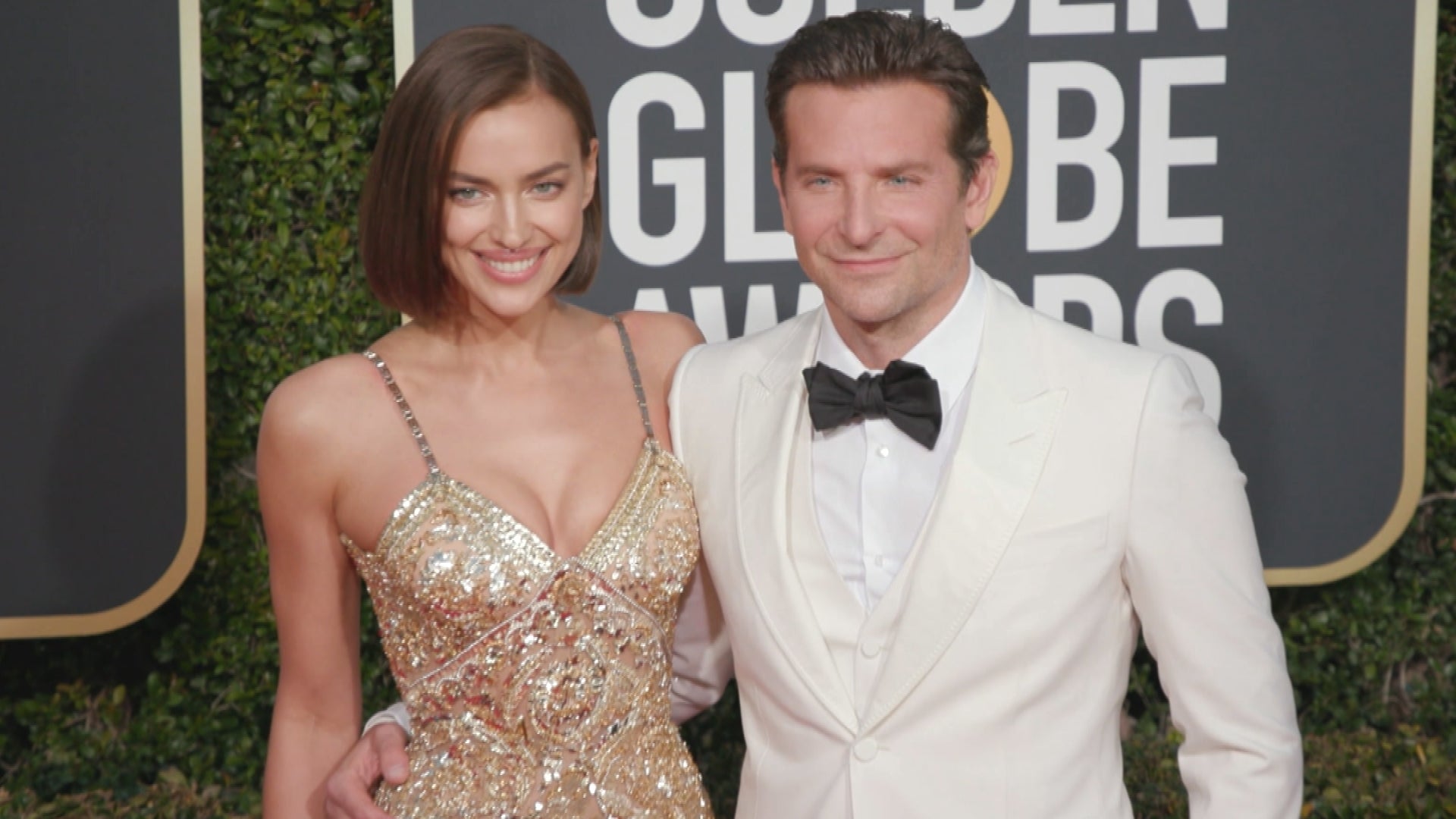 Our guest this week is Lion’s Choice CEO Mike Kupstas, and beginning Aug. 31, they will have a limited-time collaboration with St. Louis staple Crown Candy Kitchen.

Lourdes Leon has made her Met Gala debut. Madonna's daughter arrived at the Metropolitan Museum of Art in New York City on Monday wearing a stunning ensemble.

Leon, who goes by Lola, is no stranger to the fashion scene. She covered the September issue of Vogue alongside Bella Hadid, Precious Lee, Kaia Gerber, Anok Yai, Ariel Nicholson, Sherry Shi and Yumi Nu for the fashion magazine's cover feature titled "Generation America: The Models Changing an Industry."

On Monday, the 24-year-old model wowed in a fuschia gown with thousands of metallic embroidered embellishments, silver heels, and her long black locks flowing down over her shoulders.

In Vogue's September issue, Leon opened up about following her own path.

"People think I'm this talentless rich kid who's had everything given to her," she said, "but I'm not." Leon told the magazine she actually paid her own college tuition and opts to live outside of Hollywood in the artistic Bushwick neighborhood in Brooklyn.

Leon does share some of her mom's passions, however. As she shared, she's a big fan of dance.

"A teacher of mine made me understand movement in a whole new way," she explained. "You're using your body to define the space around you -- to change it. That's a very naked form of expression."

This year's Met Gala theme is "In America: A Lexicon of Fashion," an exploration of the nation’s sartorial identity and a deep dive into American ingenuity. According to the press release, the exhibition opens Sept. 18 and will highlight "everything from the luxe ease of Halston's '70s glamour to Rodarte's ethereal edge and Kerby Jean-Raymond's powerful political vision for Pyer Moss."

See more in the video below.

For complete Met Gala coverage, keep checking in with ETonline.com.

Met Gala 2021: Everything to Know About Fashion's Biggest Night Out 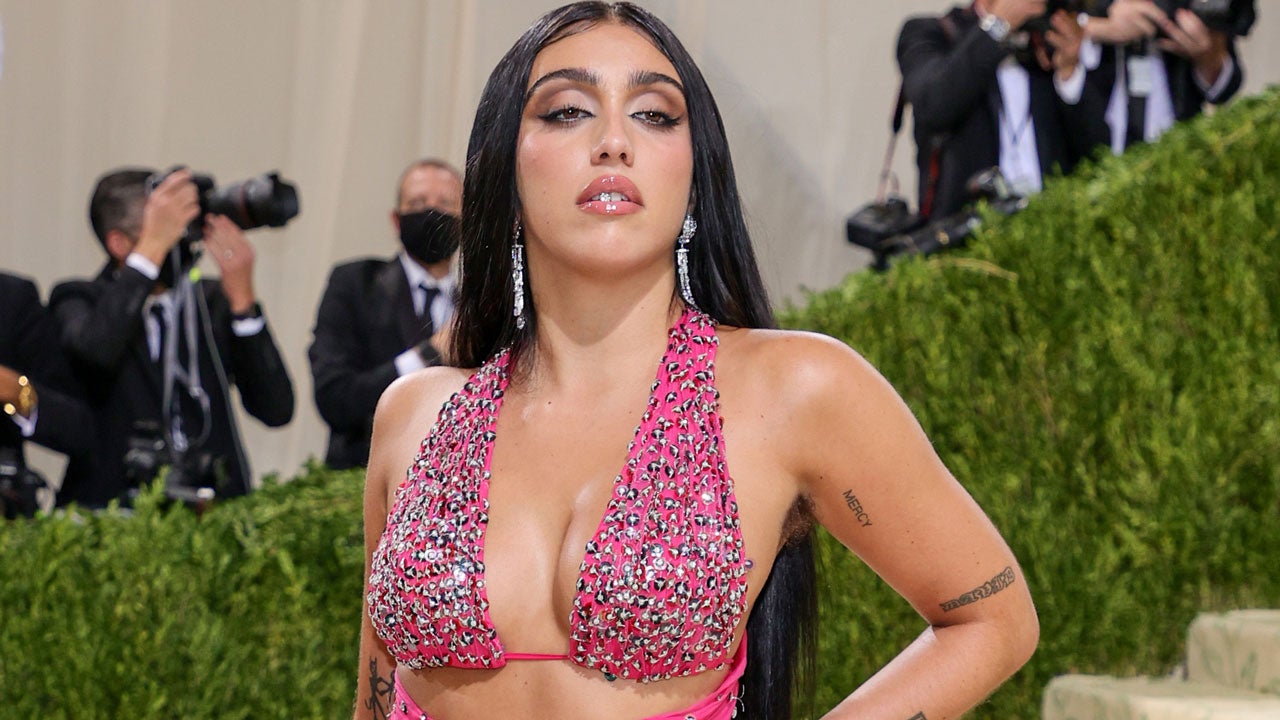 The Real Housewives is getting a mash-up series -- and Tamra Judge has joined the cast!

Andy Cohen hinted at Judge's return to the Bravo universe last month, telling ET while promoting his Peacock series, Ex-Rated, "I think Tamra -- as I've said many times -- was one of the greats and I hope at some point, either now or in the future, we'll do more with her. I don't know when, but I think that would be great."

"Viewers love Dorinda and we thought it would be great to have her star in a new show that brings her together with past favorites from other franchises," a production source told Daily Mail, who was first to report the news. ET reached out to Bravo and Peacock, who had no comment at this time.

Medley reflected on why Bravo put her on "pause" from RHONY while speaking to ET in August. She said it was the network and production company's choice, not hers.

"I'm not upset about it anymore. I was sad about it in the beginning, but I didn't personally fully understand it. But a lot of times, you don't," she explained. "The thing that was interesting was the timing. I think it was upsetting to people."

"I don't think you ever fully close last chapters, because you keep on carrying on lessons from each chapter you're in," she continued. "There is something going on for me right now where just all things have come together. … I feel stronger."

Hear more in the video below.

Eboni K. Williams on the Toll of 'RHONY' Debut & Those Reunion Rumors 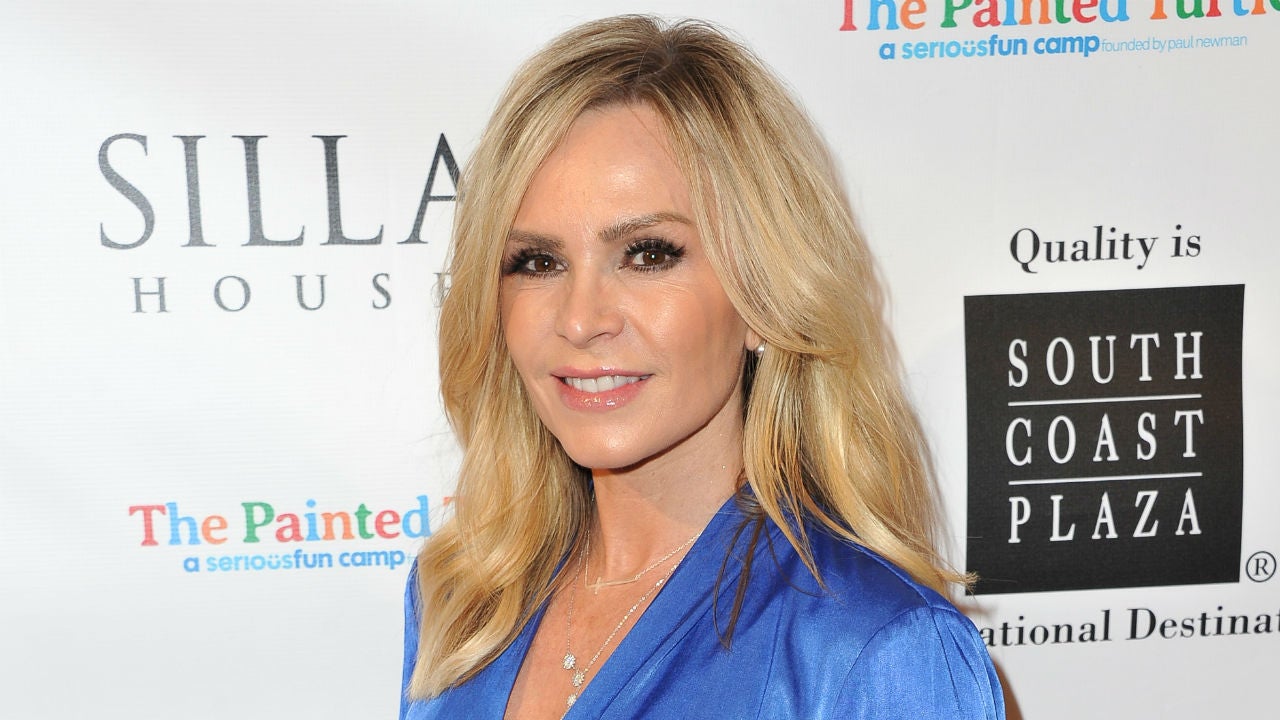